February’s meeting had the potential to be a quiet one after setting the Recipe Roulette competition last month and arranging for it to be judged next month. Fortunately though we had Mark from iMake come down to give a quick demo of a very shiny Grainfather system. The general consensus amongst the brewers was that it looked like a very well made piece of kit and had as small enough footprint to enable All Grain brewing in even the smallest of flats/sheds/cupboards! At around £650 it was also decent value as parts of the kit (particularly the counter-flow chiller) were very good quality to be included at that price! 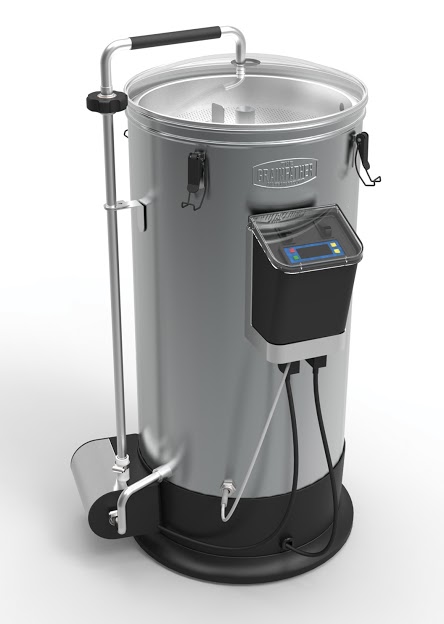 Mark, being the fine gentleman that he is, also brought in a great selection of Mangrove Jacks yeasts to add to the competition prizes for next month… and if that wasn’t enough he also came with a couple of bottles of his own homebrewed Mild and Porter for us to taste (and very good they were too!). What a guy!

We also had a guest appearance from Ben Jackson who co-runs the Liverpool Homebrewers Club. Ben brought along his White IPA, an American IPA and also a Milk Coffee Stout. Ben is a Barista by trade so had really gone to town on the coffee he used in the Stout and it certainly made all the difference. A cracking beer and would have got my vote for “Beer of the Night” although this time around we actually forgot to vote for it!

The Beer List
It was another varied selection of beers this month. Charlie went to town and brought 4 different fruit beers. Even through three came from the same base beer each was very different from the others. My Black IPA was a little young but just about ready, Pete’s Hefeweisen was a very nice example and Guy brought along a Pilsner brewed from a kit with a couple of modifications – he wasn’t totally happy with how it had turned out but wanted the groups ‘expert‘ (cough!) opinions as to what may have gone wrong! Lots of advice was given and hopefully we helped him in the right direction. We’re looking forward to more testing in a couple of months!

… and so that was February out of the way, much busier than expected! We will be back on March 31st for the judging of the Recipe Roulette competition, prize giving and of course… more great Beer! See you then!