March saw the judging of our Recipe Roulette competition set back in January. Unfortunately due to some unforeseen circumstances and a couple of last minute drop outs only five beers made it to the judges table. A crack panel of independent judges was then recruited to provide feedback on the entries and after 2 hours of scrutinising each beer the scores were counted and the results announced…

And the Runner Up took away £10 Cellar bar voucher, a Grainfather keyring and a £25 BrewUK voucher.

Not bad at all! Plus all the brewers got to spend the evening drinking each others competition entries and it’s fair to say that all of the beers submitted were great and the brewers didn’t have a bad word to say about any of them! There were also a selection of other beers brought along by Guy and Mark. 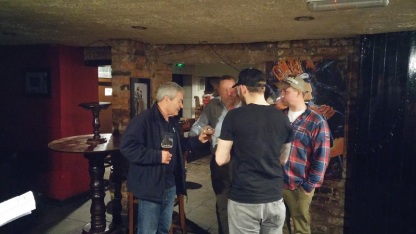 Overall our first club competition was a success and went off pretty much without a hitch! Thank you very much to Cellar Bar, Malt Miller, Brew UK and iMake for their very generous donations to the prize pots! We’ll definitely be planning another competition for the Autumn/Winter season… watch this space for details!

Though for now it is back to normal for April, see you on the 28th for a nice simple bottle swap! Cheers!